The Mike Fay Golf Show is a weekly live stream all about golf. Hosted by Mike Fay, Brent Davis, Frank Guastella, and Jason Helman. It includes a segment called Fix My Swing where viewers of the program can send their swings into be analyzed.
This week’s line up sponsored by Tifosi Optics included:
Contest Time!
Enter to win THE EYE Golf Training Aid by Great Golf Products.
Helman’s Hot 5
-Adam Schenk Retro Golf Penalty for standing behind a caddie.
-Keith MItchell winning the Honda Classic, Mizuno staffer!
-USGA Calling Out Players on social media
-Asian Players dominance on the LPGA Tour
-56 year old Vijay Singh’s putting keeps him from getting the win.
Mark Berry from Maryland wins the Tifosi Enliven Sunglass Giveaway!  Congrats Mark!
Fix My Swing
MFG University
Playing By The Rules
If you would like the chance to have your swing analyzed live on our show please go here: https://mikefaygolf.com/fix-my-swing/
Here’s Mike’s other links:
Mike’s Website: https://mikefaygolf.com/
Mike’s FB Page: https://www.facebook.com/mikefaygolf/
Mike’s Twitter: https://twitter.com/mikefaygolf
Mike’s Instagram: https://www.instagram.com/mikefaygolf/ 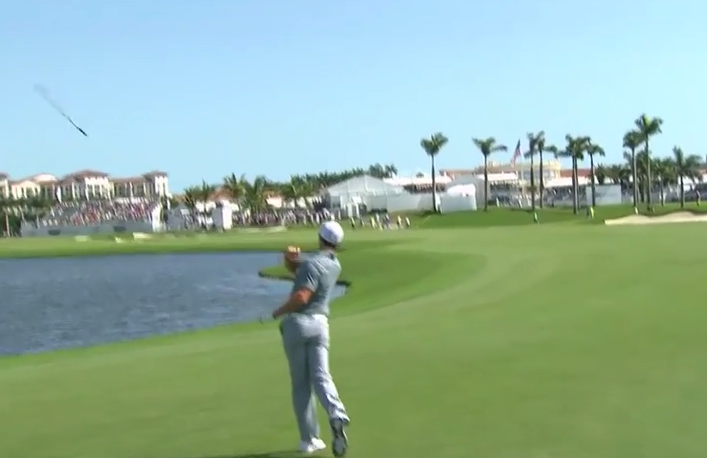 What Is Meant By Testing The Conditions of a Golf Hazard?

The other day I was asked by a player in a tournament I was officiating at that if I observe a player about to breach a Rule, may I warn the player and thus prevent a penalty.  The answer to this question is yes.

A referee is not obligated to warn a player who is about to breach a Rule, it is generally recommended that a referee should do so.  If a referee volunteers information about the Rules, he should do so uniformly to all of the players.  However, in match play where a referee has not been assigned to accompany players throughout the match, the referee has no authority to intervene and, therefore, must not warn the player other than in relation to Rule 1-3, 6-7, or 33-7.

A “referee” is one who is appointed by the Committee to decide questions of fact and apply the Rules.  He must  act on any breach of a Rule that he observes or is reported to him.  A referee should not attend the flagstick, stand at or mark the position of the hole, or lift the ball or mark its position.

If you have any questions regarding the Rules of Golf please send them to Mike Fay Golf via email, Facebook, Twitter and we will answer them for you.  Here is hoping you are “Playing By The Rules”.

On the April 13, 2014 edition of the Mike Fay Golf Twitter Show #askthepro, the question posed to me was what happens when you hit your ball into a garbage can on the golf course?  I did my best to answer the question in the 140 characters or less that Twitter allows, but I feel the answer needs a more complete explanation and this forum gives me the opportunity to better explain the Rule.

The garbage can is a movable obstruction which means it can be moved without unreasonable effort, without unduly delaying play and without causing damage.  Under Rule 24 -1b Movable Obstruction, if a ball lies in or on the obstruction, the ball may be lifted and the obstruction removed.  The ball must through the green or in a hazard be dropped, or on a putting green placed, as near as possible to the spot directly under the place where the ball lay in or on the obstruction, but not nearer the hole.  The ball may be cleaned when lifted under this Rule. If for some reason the ball to dropped or placed under this Rule is not immediately recoverable, another ball may be substituted.

If you have any questions regarding the Rules of Golf please submit them to Mike Fay Golf and I will answer them for you.  Here’s hoping you are ‘’Playing By The Rules”.