Did you know Mike is in the Guinness Book of Records as a member of a team who broke the record for the world’s fastest round of golf?  Here is an article about it!

Fastest Round of Golf
By klangdon on 7/24/08
Michigan’s Boyne Mountain Resortand News/Talk 760 WJR broke the Guinness World Record for the Fastest Round of Golf on Sunday:
7 minutes, 56 seconds
Impossible you say? The catch: it took 40 different golfers cracking the ball as it came past. Thats still a crazy low number and I wish I was there to witness it…

Golfers were strategically placed on the course’s tee boxes, along the fairways and on the greens. The timing began once the opening tee ball was struck with golfers in the fairway running to hit the ball as it came to rest. When golfers on the green sunk the putt, the player on the next hole immediately hit their tee shot. The record required over 6k total yards played, so they played three holes consecutively six times for 6,096 total yards. 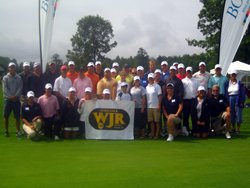